See the world of Halfbreeds through the author’s eyes.

I’ve created a couple of the iconic images that stick in my mind. I keep going back to the barn for some reason – every image looks similar to how I picture it, and eventually, I’ll get one that looks exactly right.

Above is a closeup of my first one that I did in colored pencils.

Here is an oil pastel I did just the other day. The terrible forest is in the upper right corner.

I thought I was going to put the barn in this one, but turned into a stretch of the Terrible Forest. The hard copy is very heavy and shiny since it is done in thick oil paint.  I was out of blue paint, but I think I like this better. It brings across the true feel of the forest. 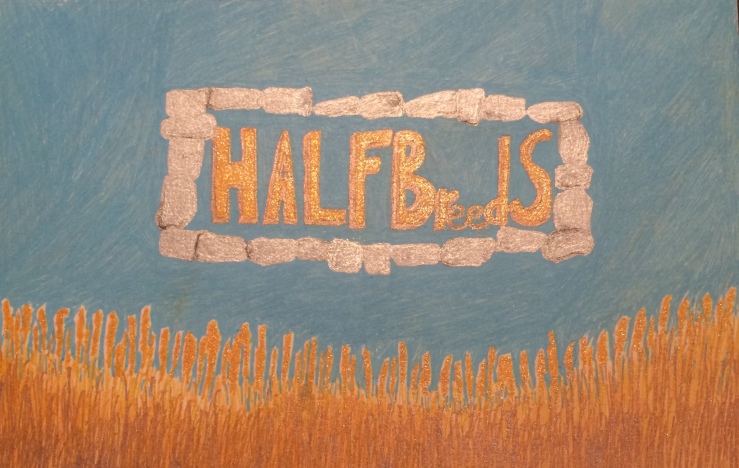 I wanted to work the title into the wheat field, so here’s the logo in colored pen! I used up an entire blue pen on this one.

Finally, here is a sketch I did of Cornanam a long time ago. I waited to post because I kept thinking I would finish it, but I just never got around to it.

Here are some quotes from the book accompanied by images of a few of the characters.

“They’re such an odd group of individuals. Full of patience. And keen for truth and knowledge.” He sounded pleasantly surprised.

Morgan nodded. “Yes. Those are their chief characteristics. But they are also stubborn, careful, wild, and unpredictable. There is a primal element to them that, when it comes out, shocks one who is accustomed to their politeness. You heard that war cry. I have seen far worse and far more baffling examples of their feral nature.”

“They’re Human. Humanity is always dangerous. I think the real question is: are they good? That remains to be seen in each and every one of them.”

Dalimi is one of the Halfbreed children. She is six years old when we first meet her, and by the end of the story, has grown to be a woman. She is smart, sensitive, loving and patient; quick to judge and sometimes too quiet for her own good.

When we first meet her: “The Halfbreed inside was a little girl about six years old, with red hair and normal legs. But her eyes, which were mostly blue, had orange streaks in them.”

Five years later: “She was beautiful. At eleven she promised to one day be the most gorgeous girl in camp, with her fiery red hair and prettily rounded figure. There was nothing of a Schump in the way she carried herself.”

“Bobakin looked at the little redhead whose vivid, blue eyes were like sparkling crystals. She was so responsible, so sensitive, so concerned.”

“She was making breakfast, and looking remarkably pretty with her red curls pulled back and her face flushed with the heat of the fire.”

“As he turned and went away, Damili watched him with starry, tear-filled eyes.”

“She was always so cautious and suspicious…”

“She was cast upon the ground, her red hair spewed like a cataract of glistening fire, her dress a blue cloud of daintiness, and her shoulders heaving in hard sobs.”

A few more years after that:  “Dalimi came over and sat beside Bobakin, busying herself with weaving a basket. Bobakin did not send her away as he once would have, but was obviously contented and more at peace with her by his side.”

“She knew better than to push him when he was reticent to speak, and so she just went quietly about the tent, tidying, sewing, and doing the little things a wife does.”

“She sat at his feet for what felt like a long time, but was less than a minute. Then he held out his arms, and she fell into them.  He held and caressed her for all he was worth, bitten by the sting of the words he had flung at her. She was his own flesh, and when he wounded her he wounded himself.”

Bobakin is the leader of the halfbreeds. He is motivated by the kinship and responsibility he feels for each and every child in his care. He is passionate but intelligent, fierce but melancholy. He has experienced great heartbreak and boundlessly wild, unfettered joy.

“One day, after he’d had a bath and was combing it before the mirror, he saw to his horror that his hair was green. Only a small tinge of green in the muddy brown color, but it was there. He was transforming into a Schump for his sins and would be burned to death.”

“Bobakin had no thoughts of death, for himself or the Humans. Just joy, and it was joy that was ripping through his untamed heart.”

“Bobakin stood still a long moment. He was not surprised,  just saddened; abandonment was an old wound, freshly stabbed.”

After three years of writing, editing, and submitting, my very first novel is available for purchase!

Halfbreeds is a story about deformed children born of human mothers and monstrous fathers. Hunted, hounded, and hated, they are left to fend for themselves away from civilized society, and grow up to define their own type of civilization.

You can purchase the story on Barnes and Noble, Amazon, Kobo, iTunes, and Smashwords. 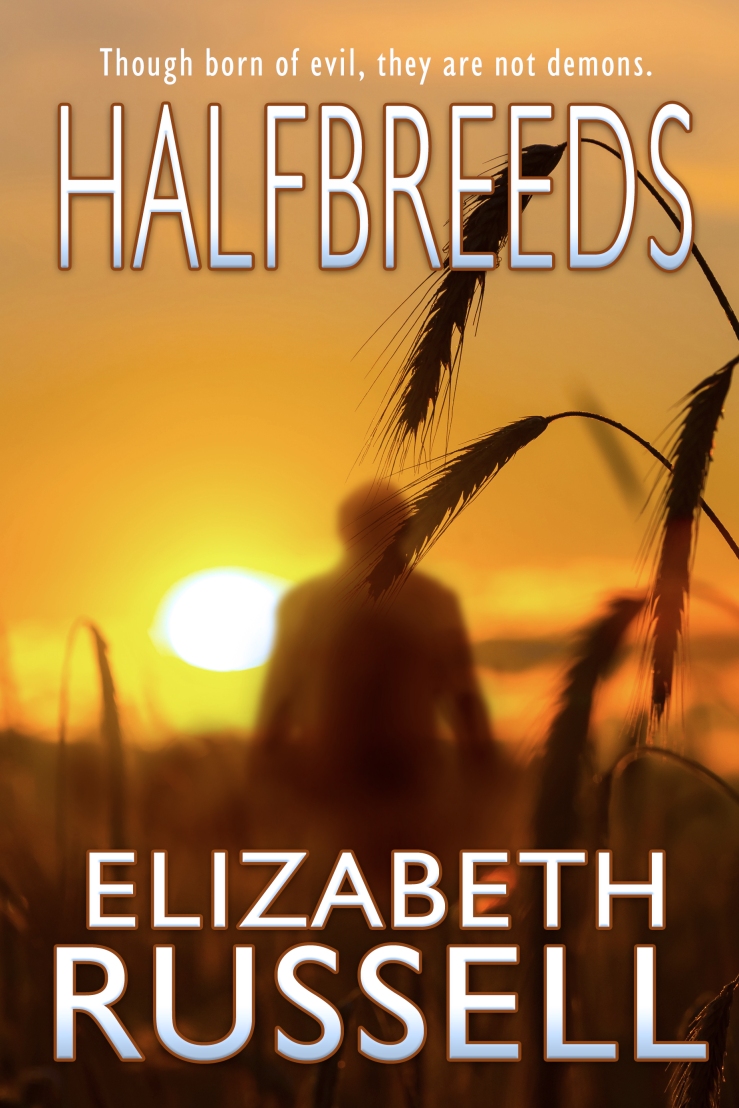 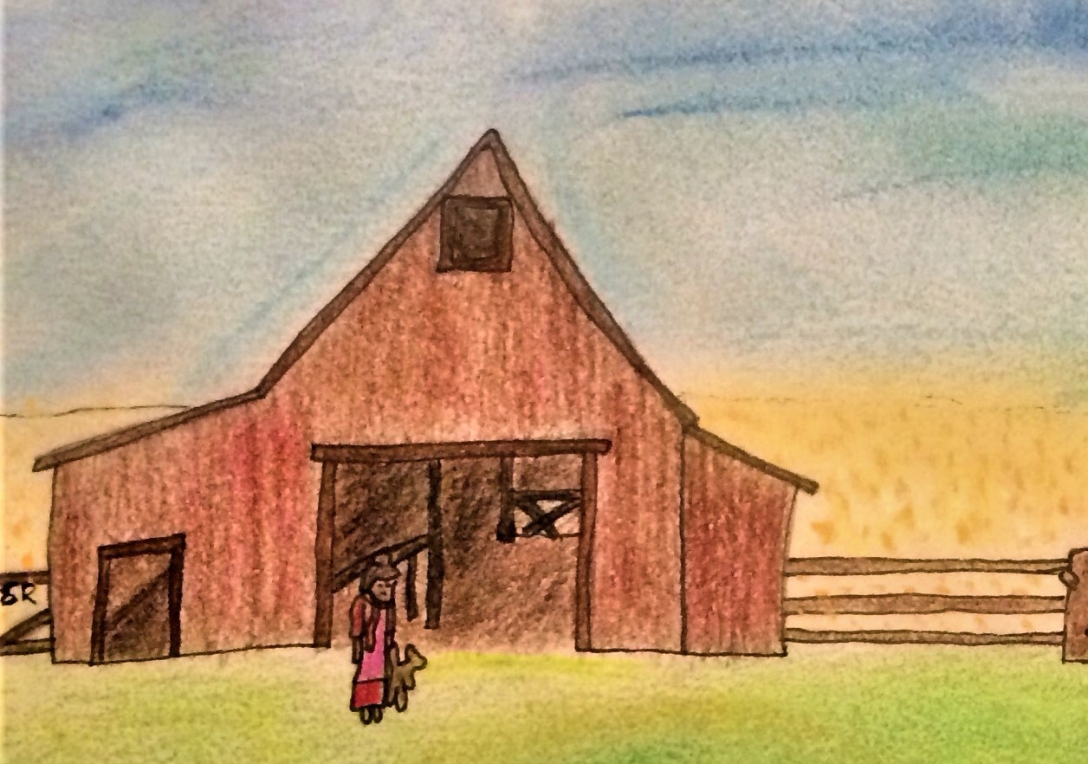 When Bobakin was born, he was as normal as any other boy in the village, only rather bald. He had a loving mother and father and knew nothing of the evils of the world. Then one day, when he was four years old, he saw a child burned in the square. When he asked his father why, he told him the boy was evil, “a Schump.” And from the fear in his father’s voice and the shudder of his shoulders, Bobakin knew he never wanted to meet a Schump. As  he grew, he heard tales about the Schumps—how they looked with their eyes the color of hell’s fire, hair the rank growth of green weeds, and short, stumpy legs that caused them to waddle and hobble like a lame duck. Some of the villagers told ghost stories to the children, warning them if they weren’t good, they’d change into a Schump for their sins and be burned to death.

When Bobakin was five years old, his hair finally began to grow in; and one day, after he’d had a bath and was combing it before the mirror, he saw to his horror that his hair was green. Only a small tinge of green in the muddy brown color, but it was there. He was transforming into a Schump for his sins and would be burned to death.

He ran out to the garden and rubbed mud all into it to conceal his disgrace and keep alive. Miraculously, this trick worked, and Bobakin managed to keep his secret for three whole years, often forgetting his shame, and even enjoying life. He went to school to learn his numbers and letters and was a bright child— far ahead of all the others in his class, though his teachers always complained of his dirty hair.

Then one day, and this day did not seem any different from any of the others, his mother walked by him and ruffled his hair.

“You’re so dirty!” She laughed at him. “You always are, and no amount of bathing ever seems to get it out of you.” And on an impulse, she grabbed a jar of water and poured it over his head.

There was a ghastly silence, and Bobakin was afraid to look at her. When he did, her face was white. “A Halfbreed,” she whispered, and it was the first time he ever heard the word. “My only son, a Halfbreed. I swore, I swore it was your father’s—I did— I swore you were. But you’re not—you’re a Halfbreed.”

“I will be burned?” he asked with wide open eyes. She did not answer, but he saw the look on her face.

She ought to have sounded the alarm, as they had done with so many children before, but right then she could not move. Bobakin saw she no longer looked at him as a mother looks at her child, but as a woman looks at a frightening thing: a snake or a rat that has wandered into her kitchen. This gave him the courage to do what he must, the courage to turn tail, then and there, and run away from home forever.